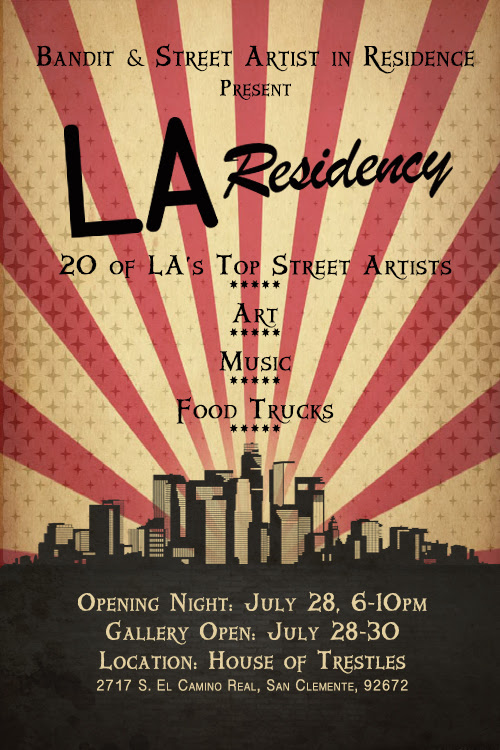 Directly from the Press Release:
San Clemente, California:  Bandit, in association with Street Artist in Residence, presents the “LA Residency”.  More than twenty of Los Angeles’ finest and most recognized street artists unite in San Clemente to bring you an incredibly unique exhibition of exquisite eye candy.  Widely known as an artist residency program for international street artists, SAiR is opening it’s doors for the first time to Los Angeles based Street Artists.  “LA Residency” will open at House of Trestles on Friday, July 28th, 2017 and run one weekend only through July 30, 2017.

Special accommodation packages are being offered to guests of “LA Residency” at House of Trestles, home of the Street Artist in Residence program. Come for the art, stay at the beach.  Skip the traffic, take the train from Union Station to San Clemente.  For more info and availability, go to www.HouseOfTrestles.com/laresidency

About Bandit: Working primarily in the Downtown, Skid Row, and South Central neighborhoods, Bandit’s art is a fixture of Los Angeles’ streets. Bandit’s increasingly intricate murals and stencils aim to confront his viewer with the most arresting socio-political issues of our time. Bandit has over 500 pieces to his credit and has collaborated with many notable LA contemporaries.  Instagram:  @BanditStreetArt

About Street Artist in Residence: Street Artist in Residence is a 501c3 nonprofit artist residency program established in 2017.  SAiR is dedicated to maximizing exposure for international street artists, enhancing the pedestrian experience with public art, and creating a unique experience for artists during their residency. Residencies range from 30-90 days, during which time artists stay on-site at the House of Trestles and interact with fellow world travelers, in the beautiful beach town of San Clemente California. Website:  StreetArtistinResidence.org  Facebook and Instagram: @StreetArtistInResidence

About House of Trestles:  House of Trestles is a Bed & Breakfast & Surf Hostel, steeped in San Clemente Surf Culture and Street Art. Located on Surfer’s Row at  within walking or bike riding distance to 16 local breaks, including world famous Trestle, the project consists of five Team Rooms, designed by local surf companies, including Lost Surf Boards, Rainbow Sandals, Ripcurl, Vissla & Catch Surf. When not used by the surf companies the Team Rooms are open to the public and provide a unique connection to the surf industry and their team riders. Website: HouseOfTrestles.com